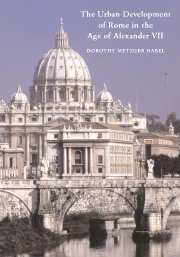 The Urban Development of Rome in the Age of Alexander VII