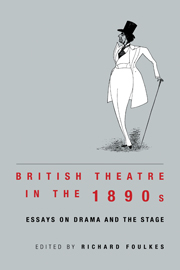 British Theatre in the 1890s
Essays on Drama and the Stage