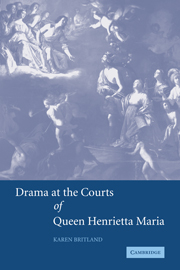 Drama at the Courts of Queen Henrietta Maria