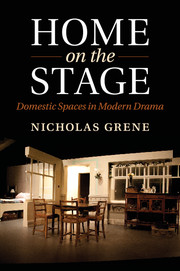 Home on the Stage
Domestic Spaces in Modern Drama