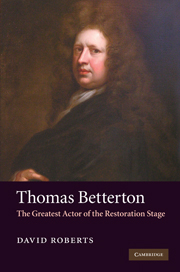 Thomas Betterton
The Greatest Actor of the Restoration Stage