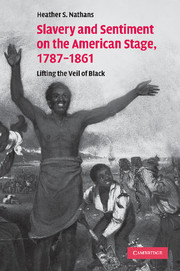 Slavery and Sentiment on the American Stage, 1787–1861
Lifting the Veil of Black