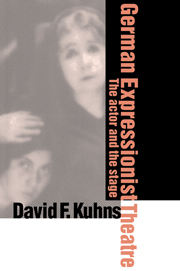 German Expressionist Theatre
The Actor and the Stage