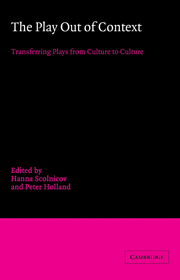 The Play out of Context
Transferring Plays from Culture to Culture