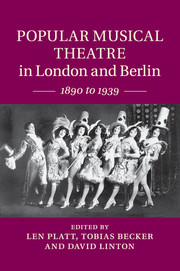 Popular Musical Theatre in London and Berlin
1890 to 1939