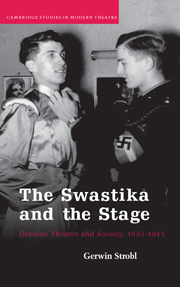 The Swastika and the Stage
German Theatre and Society, 1933–1945