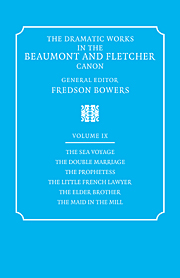 The Dramatic Works in the Beaumont and Fletcher Canon

Volume 9. The Sea Voyage, The Double Marriage, The Prophetess, The Little French Lawyer, The Elder Brother, The Maid in the Mill

Part of Dramatic Works in the Beaumont and Fletcher Canon