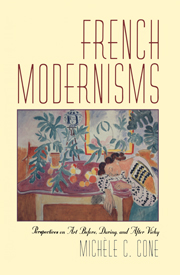 French Modernisms
Perspectives on Art Before, During, and After Vichy