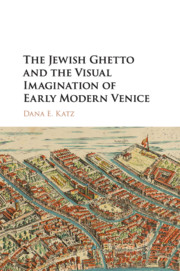 The Jewish Ghetto and the Visual Imagination of Early Modern Venice