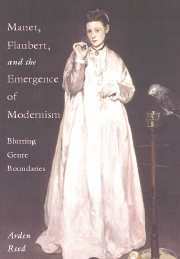 Manet, Flaubert, and the Emergence of Modernism
Blurring Genre Boundaries