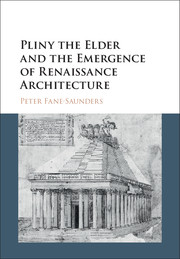 Pliny the Elder and the Emergence of Renaissance Architecture