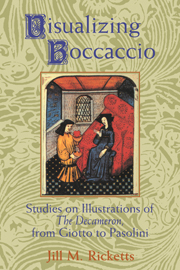 Visualizing Boccaccio
Studies on Illustrations of the Decameron, from Giotto to Pasolini