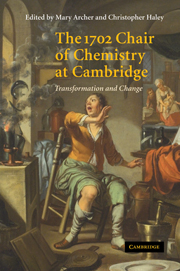 The 1702 Chair of Chemistry at Cambridge
Transformation and Change