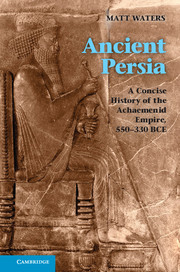 Ancient Persia
A Concise History of the Achaemenid Empire, 550–330 BCE