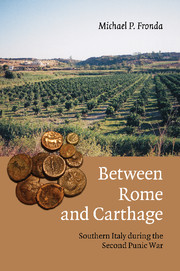 Between Rome and Carthage
Southern Italy during the Second Punic War