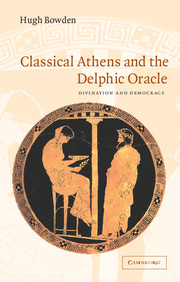 Classical Athens and the Delphic Oracle
Divination and Democracy