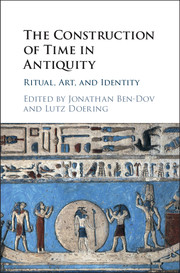 The Construction of Time in Antiquity
Ritual, Art, and Identity