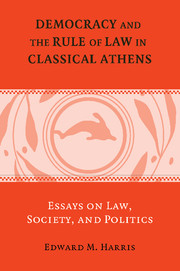 Democracy and the Rule of Law in Classical Athens
Essays on Law, Society, and Politics