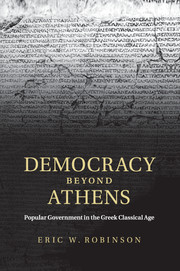 Democracy beyond Athens
Popular Government in the Greek Classical Age