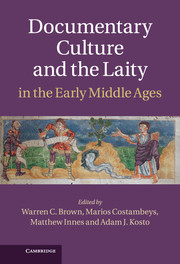 Documentary Culture and the Laity in the Early Middle Ages