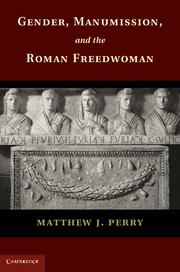 Gender, Manumission, and the Roman Freedwoman