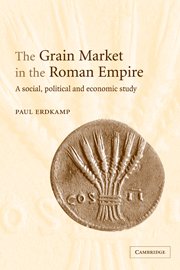 The Grain Market in the Roman Empire
A Social, Political and Economic Study