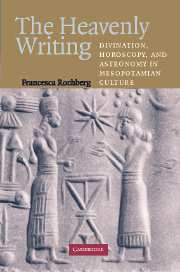 The Heavenly Writing
Divination, Horoscopy, and Astronomy in Mesopotamian Culture