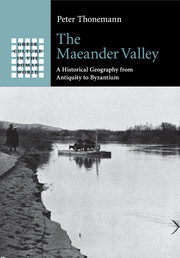 The Maeander Valley
A Historical Geography from Antiquity to Byzantium