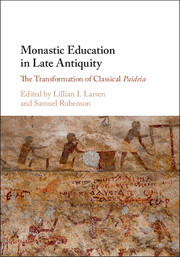 Monastic Education in Late Antiquity
The Transformation of Classical Paideia