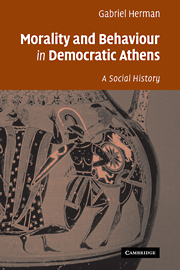 Morality and Behaviour in Democratic Athens
A Social History