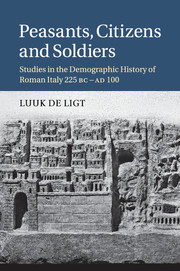 Peasants, Citizens and Soldiers
Studies in the Demographic History of Roman Italy 225 BC–AD 100