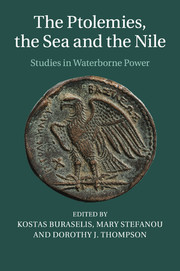 The Ptolemies, the Sea and the Nile
Studies in Waterborne Power