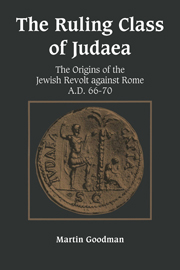 The Ruling Class of Judaea
The Origins of the Jewish Revolt against Rome, A.D. 66–70