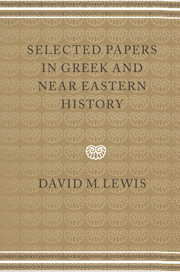 Selected Papers in Greek and Near Eastern History