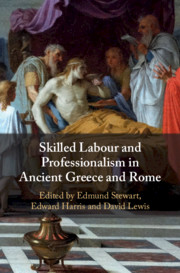 Skilled Labour and Professionalism in Ancient Greece and Rome