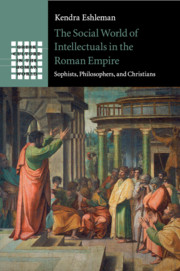 The Social World of Intellectuals in the Roman Empire
Sophists, Philosophers, and Christians