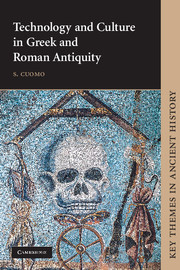 Technology and Culture in Greek and Roman Antiquity