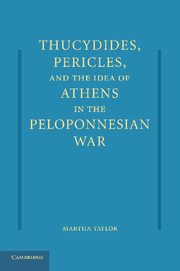 Thucydides, Pericles, and the Idea of Athens in the Peloponnesian War