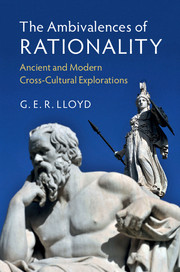 The Ambivalences of Rationality
Ancient and Modern Cross-Cultural Explorations