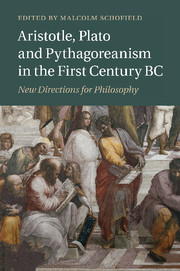 Aristotle, Plato and Pythagoreanism in the First Century BC
New Directions for Philosophy