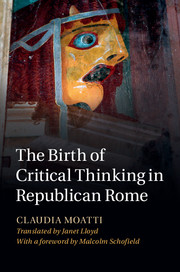 The Birth of Critical Thinking in Republican Rome