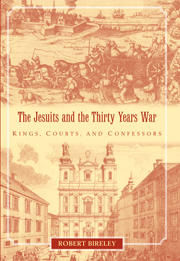 The Jesuits and the Thirty Years War
Kings, Courts, and Confessors