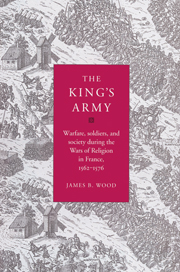 The King's Army
Warfare, Soldiers and Society during the Wars of Religion in France, 1562–76