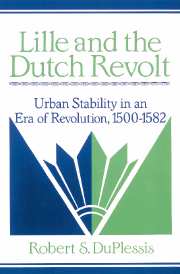 Lille and the Dutch Revolt
Urban Stability in an Era of Revolution, 1500–1582