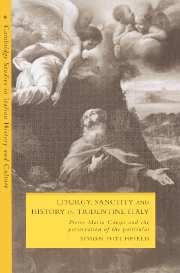 Liturgy, Sanctity and History in Tridentine Italy
Pietro Maria Campi and the Preservation of the Particular