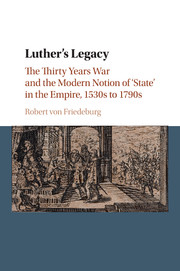 Luther's Legacy
The Thirty Years War and the Modern Notion of 'State' in the Empire, 1530s to 1790s