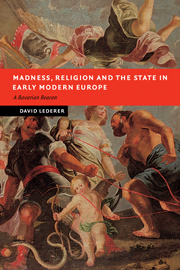 Madness, Religion and the State in Early Modern Europe
A Bavarian Beacon