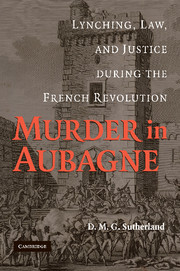 Murder in Aubagne
Lynching, Law, and Justice during the French Revolution