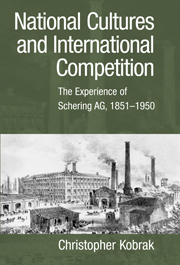 National Cultures and International Competition
The Experience of Schering AG, 1851–1950