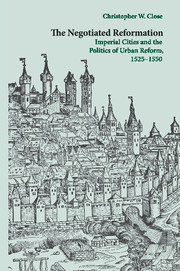 The Negotiated Reformation
Imperial Cities and the Politics of Urban Reform, 1525–1550